"Paying For The Past" presentation, none other than Dick Fisher, Al Greenspan, and Larry Lindsey appear to have crossed the Rubicon of denial, lies, and deception to the dark-side of accepting reality. 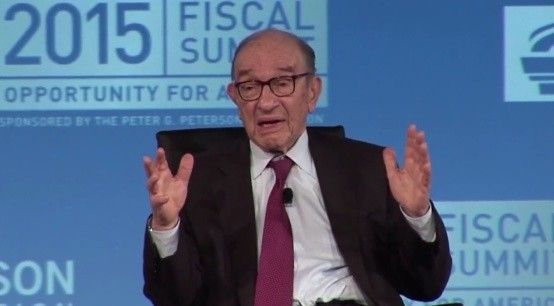 IPM Group Note: Do yourself a favor and listen very carefully to this interview with these 3 men and then re-wind it and listen again. This is truly shocking how honest they have suddenly become. Obviously all the facts they mention in this interview we write and talk about here at IPM on a regular basis.

In the ironically titled "Paying For The Past" presentation, none other than Dick Fisher, Al Greenspan, and Larry Lindsey appear to have crossed the Rubicon of denial, lies, and deception to the dark-side of accepting reality. As Bill Holter asks, why exactly would these former Federal Reservists hint that, mathematically, logically, intuitively and in real life, IT'S OVER!   Do they now realize what the crazy gold bugs have been saying all along is true and the day of reckoning is very close at hand.  They must be trying to get "out in front" of what is coming so they're on the record for historical and "legacy" purposes.  Nothing else makes any sense.

As Bill Holter details...I could only chuckle after watching the interview because my entire writing can now consist of "yeah, what they said!".  Rather than write an entire article on this, I believe it might be better to let you watch what I was going to write, and we can move on to the "motives" of these three telling "mostly" the truth.  If you watch this interview, please keep in mind this one question "...and the alternative is"?

Why exactly would these former Federal Reservists hint that, mathematically, logically, intuitively and in real life, IT'S OVER!  They did back peddle a little bit as the interview went on but "why" or better yet why now?  I believe they know what the crazy gold bugs have been saying all along is true and the day of reckoning is very close at hand.  They must be trying to get "out in front" of what is coming so they're on the record for historical and "legacy" purposes.  Nothing else makes any sense.  Are they "trying" to torpedo the system or to break confidence?  I highly doubt it but after watching the interview, would any kid with a paper route invest their money into the current system?  Are they trying to bad mouth the Fed now they are no longer employed there?  No, in fact, they each one pointed the blame at Congress.  It's Congress' fault we are in this mess!  "They" (Congress) spent the money and made the promises which cannot be honored and will ultimately be broken.

There is a punch line of course, one these three men don't want you to hear!  Actually, the joke AND the punch line are both one in the same, "the money itself is bad and is the core to ALL economic and financial problems!".  You see, Congress could never had authorized all of the spending if the Treasury did not have the "money" in its coffers.  Yes Treasury could have borrowed money but would have been restrained if "money" was gold or something "real".  The only way that Congress has been able to get away with bankrupting the country was with the aid of ... yes, the FEDERAL RESERVE these guys used to work for!  The Fed has in fact underwritten the scheme, if there was no Fed ...the leverage could never have been built into the system.  Greenspan, Fisher and Lindsey of course know this but they can never admit it.  Were they to admit it, it would be an admission that they knew all along they were driving the bus over a cliff ...with a roadmap wide open!

All three spoke about the current state of interest rates and the unsustainability of the situation.  They ask "why", for what good reason are interest rates at levels only justified by a crisis?  The answer of course is; we are still in a crisis, we never exited and if rates HAD been increased ...their greatest fears would have already been realized!  Mathematically, rates cannot go higher because of the inability to service interest payments (not to mention blowing up the leveraged interest rate derivatives) would come front and center.  They are trying to say the inability to pay is guaranteed to come ...but is a future event.  If rates were to rise now, it becomes a current event.  It's really this simple!

Lawrence Lindsey even said at the 45 minute mark, "this is how they all end ...including Zimbabwe"!  All "what" Larry?  Fiat currencies?  Or central banks who issue them?  This brings me to another article which has come out and ties in perfectly.  Actually, it ties in so well we can bring this entire article full circle and back to one of the gold bugs most central theses.  Zerohedge posted an article regarding a systemic bet being made by billionaire hedge fund manager Paul Singer.  Mr. Singer's strategy is simple, he calls it the "bigger short".  He believes interest rates have only one way to go, up.  He also believes we will see far more staggering defaults than we did in 2008-09.  He believes shorting the debt of the world is a no brainer trade and one where you can win ALL the marbles.

Zerohedge of course picked up on the "minor flaw" in this strategy.  The very same flaw I might add that Harry Dent, Martin Armstrong and others are missing.  You see, when you "win", you must be "paid", but paid in "what" is the question.  Assuming Mr. Singer is correct and the system does collapse on itself and he "wins".  His win of course will be HUGE ...but, he will be paid in dollars or euros or whatever fiat currency his trade is done in.  What will his winnings be worth if the currency itself is worth nothing?  It reminds me of Mikhail Barishnikoff in the movie "White Nights", he had a stack full of worthless rubles and threw them handful after handful up in the air while saying "rubles, rubles, lots and lots of rubles".  He had money ...but it wasn't worth anything.

You see, the currencies themselves are supported by the very debt Mr. Singer is selling short and expects to collapse!  Which now brings us back full circle to the crazy gold bugs.  This is exactly what they have been saying all along, a debt default will also mean a collapse in confidence of the currencies themselves and direct "fear capital" back into real money.  This will create huge demand, force supply into hiding and additionally revalue gold higher because the currencies themselves are losing value and confidence.  Gold bugs are not so different from those who see the dangers in the system from overheated markets and overleveraged debtors.  The only difference is that these nut jobs want what hasn't been for nearly 50 years, they want TRUE and REAL "SETTLEMENT"!  They actually want to get paid in something real!  How crazy is that?